Do you dread meetings?

Worry that you will put people to sleep?

Wonder whether anything that you are saying is making sense?

Think that you should have just sent out an email memo instead?

Every manager needs to master the skill of managing a meeting. Participants will leave a meeting chaired effectively with a sense of accomplishment and a clear understanding of future directions and tasks. If you want to chair successful meetings, follow these important steps…

When you wait for latecomers, you penalise those who have arrived on time – and you inadvertently reward those who come late. Before long, everyone will arrive late. So how do you get people to your meetings on time? By starting on time! Always.

2. Get the meeting off to a business-like start.

Welcome and introduce yourself and the other participants and, if necessary, explain their roles. Clarify the objectives of the meeting, ensuring that each member understands the task at hand and is aware of the expertise available in the group. Be brisk and businesslike.

3. Preview and confirm the agenda.

Check that each member publicly agrees with the stated objective of each listed agenda item, thereby ensuring that all irrelevant and hidden agendas become redundant. Indicate the criteria for a successful meeting and, in particular, how the group will decide or know when the outcomes are achieved. Other items might be suggested. After listing them under ‘Other Business’, close off the agenda.

4. Focus constantly on your objectives.

A meeting is held for a purpose – so keep its main objectives and desired outcomes clearly in mind at all times. Consider the following process:

Initiate discussion on each item by setting the scene briefly and asking for responses. You may refer the matter first to a member who can make the best initial contribution.
Reinforce each item. When moving on to a new agenda item, reiterate and clarify its purpose and objective.
Clarify issues. If debate leads to confusion, it’s your task to unravel the strands so that a decision can be reached.
Summarise regularly. Particularly during lengthy discussions, summarise progress periodically to maintain a sense of direction.
Clarify the decision-making process beforehand. If people aren’t sure about whether a decision has been made or, if it has, by what means, conflict and poor productivity will result.
Conclude discussion of an item by summarising. When you sense consensus on major points, test it on the group, vote if necessary, and record the result. Resist the temptation to try to force people into agreement in order to tidy up discussions.
When a decision has been made, be clear just what the decision is and how it will be implemented. Assign responsibilities and set deadlines for action.
If an issue can’t be resolved, find out why and appoint a task group or an individual to investigate and report to the next meeting. 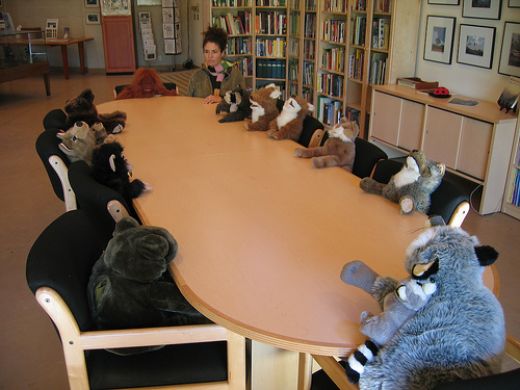 Try to end on a positive note, even when there has been substantial disagreement during the meeting. Perhaps you could save for last an agenda item on which everyone can agree. Respect the plans of those who assumed that the meeting would end on time. Stop discussion about five minutes before the scheduled finishing time. Sum up the entire meeting; restate the outcomes; confirm allotted tasks and deadlines; and thank participants. Announce the time and date of the next meeting.

6. Review and analyse the success of your meeting.

While the meeting is still fresh in your mind, assess its effectiveness and review your own leadership style. Use that information to improve your next meeting.

You may, for example, raise with yourself such issues as these:

Some people who should have been at the meeting were absent.
People with important things to say were not given a proper hearing.
The chairperson talked too much.
Discussion was allowed to ramble on after a decision was made.
The meeting ran out of time.
Some subjects failed to result in decisions.
Too much time was spent on some subjects; others were neglected or omitted.
Some decisions were made on inadequate evidence.
Several members came late and left early; others slipped in and out.
The meeting went beyond the agreed finishing time.

Concise minutes, including a listing of decisions made, tasks assigned, and deadlines for action and follow-up, should be completed and distributed promptly. If necessary, inform other interested parties of outcomes as soon as possible after the meeting. Then, if possible, monitor the progress of assignments. At the next meeting, uncompleted assignments should be considered and unmet deadlines discussed. Such accountability helps ensure that the agreed outcomes of your meeting will have some meaning next time.