“Brainstorming is a technique often used in connection with idea-getting which has produced some amazing results. The term and its application grew out of advertising man Alex Osborn’s attempts to improve the creativity of copywriters, and has been adopted wholesale by industry. Many firms report amazing success in the use of this stimulating technique, which uses the group approach to idea-getting…

Continental Can Company found some profitable savings through brainstorming the question of how to use the angle irons which came to guard corners of tin plate from the mill. Previously these had been scrapped, and sold for a fraction of their value. Through brainstorming, over 50 usable ideas for commercially producible items or money-saving uses came out of the scrap-iron piece.

Ultimately, ideas must be evaluated from the viewpoint of their value and practicality. This ordinarily falls to a few people who have the broad picture of the needs and procedures of the firm, and can fit new ideas into operations.”

When we think of brainstorming, we can be taken back to our days at desks in school where we mapped out ideas for a Shakespeare play, identified problems with a scientific experiment, or creatively put together a plan for survival. As we get older, we often forget to brainstorm and can sometimes assume we should know it all at the very beginning. No! Brainstorming is all about collaboration and realising that our first thoughts aren’t always our best. You never know what ideas you have bubbling in your subconscious until you give yourself time to find them.

For all of you who are interested in developing Creative Problem Solving Skills including Brainstorming, check out our video outlining our short course on the topic.

Brainstorming is universally recognised as one of the most effective ways of generating ideas but, according to ‘Stormin’’ Norman Schwarzkopf, Saddam Hussein had trouble understanding the rules of the game.

According to Schwarzkopf, the Iraqi dictator called together his think-tank of trusted advisers to come up with suggestions on how the long-running war with Iran could be ended. One of his closest friends and confidants was first to speak…

‘Here’s an idea,’ he said. ‘Seeing that the Iranians refuse to sign a peace treaty while you remain as President, why don’t you stand down for six months until the treaty is in place? Then you can assume control after this time.’

Saddam Hussein was not impressed. He took his friend and adviser outside – and shot him!

At that point, we suspect, the really creative ideas from the President’s advisers suddenly dried up. Saddam Hussein would have done well to have brushed up on the techniques of brainstorming before scheduling his next meeting of advisers. 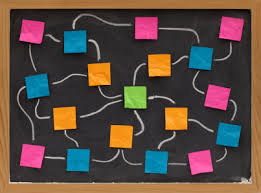 Credit for the creation of brainstorming goes to Alex Osborn who, in the early 1940s became executive vice-president of one of the world’s largest advertising agencies. In such an industry, conferences were vital-but he found that in his organisation, they were also negative. Every conference he attended was dominated by a climate of ”no, no, a thousand times no’. In advertising especially, new ideas, hundreds of ideas, were vital. Yet in these meetings ideas were being suffocated as soon as they were mentioned and too many ideas people who knew this remained silent. Enough, said Osborn, and he developed the brainstorming strategy in which a problem can be attacked, indeed stormed, by dozens of ideas. His agency began using the technique with great success and it was soon being imitated worldwide.

In 1953 Alex Osborn, founder of brainstorming, published ‘Applied Imagination: Principles and Procedures of Creative Thinking’, in which he revealed the basic ingredient of any brainstorming session – his four rules:

Brainstorm via fax or e-mail

What can you do when an important project needs brainstorming – but the key participants work at different locations?

Dartnell recommends that you use fax and e-mail to get the job done. Here’s how – The project leader outlines the project, then faxes (or e-mails) that document, along with a routing list, to the first person on the list. That person provides input and sends it to the next person. The project leader is the last to receive the communication, at which time s/he collates the input and takes appropriate action.

Put a bulletin board in a central area and encourage your staff to use it to brainstorm ideas. Write a theme or problem on a coloured card and pin it in the centre of the bulletin board as the topic of the week. Provide a bundle of A5 sheets of paper on which your staff can jot down their ideas for posting on the board throughout the week. You’ll find that, like most good brainstorming activities, people will build on the ideas of others as fresh postings are read each day.

Brainstorming and Problem Solving are critical Business and Management Skills. At Global Training Institute we value high quality training that is set to the Australia Qualifications Framework standards. If you are looking for quality online training in the areas of Management, Business, Project Management, Leadership, Civil Construction, Mining or Corporate Governance, please feel free to contact us on 1800 998 500 or email us at [email protected]