In line with our past couple of blogs, we found a few more interesting things regarding problem solving that we thought may be useful to you. 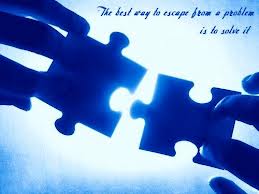 What is the problem – exactly?

On a trip to a Marriott hotel, Bill Marriott, the son of the founder of the Marriott Hotel chain, noted that a particular dining room hostess was rated below standard by the guests. He asked the manager what the problem was. The manager didn’t know but, when pressed, revealed that her pay was a few dollars below the going rate. To lift her weekly pay packet, he would need the approval of Marriott headquarters, but was apprehensive about asking.

Firstly, head office had far too much control over the operation. Why shouldn’t the manager be given the authority to set the hostess’s salary without having to contact headquarters.

Secondly, head office was focusing too much on profit, and not enough on customer satisfaction.

Thirdly, hotel managers seemed to be afraid to contact head office, even for a simple request. Why?

On the surface, the problem was one of a below-market-rate salary. Bill Marriott concluded that several problems stemmed from senior management’s failure to listen to others in the empire. He knew that the toughest part of problem solving is actually defining the problem.

In trying to define a problem, in order to gain a basic understanding of it, you must be able to ask a series of questions about it…

The guru on the mountain

There was once a manager who sought an audience with the wisest management guru of them all. The manager wanted to know the ‘secret of management’ – in particular, what was it that would make him a good manager.

So he climbed the mountain of wisdom and reached the top. There he found the management sage – but was disappointed to learn that it was the guru’s day off. It was the guru’s ‘day of silence’.

“But I’ve come all this way to find out from you, the wisest management guru of all, the secret of good management,” pleaded the manager.

The sage, ever helpful, beckoned the manager to hand him pencil and paper which he did. He wrote on the sheet and handed it back to the manager. On the paper, the sage had written: “AWARENESS”.

The manager was somewhat put out at this.

“You mean I’ve come all this way for you to tell me that the secret of good management is simply AWARENESS?” said the manager. “Surely there must be more to it than that.”

If you are always the problem solver and never teach the people around you to think and decide for themselves, you will have a dependent group of followers. It’s smarter to focus on helping people solve problems rather than helping solve people’s problems. The following suggestions, from US leadership developer John Maxwell, are some approaches you should find effective:

Your goal should be, says Maxwell, that when the meeting is over the other person has processed the problem, selected a solution, developed a game plan, and taken ownership of it. His or her relationship with you will then not be a dependent one, but a deepening one.

There are many ways to solve problems, but, according to Wilson Learning Corporation in Minnesota, everyone has a preference. Recognising your own style and that of others in your team can assist when tackling a problem as a team. Here are four recognisable styles:

The Difference between Focus on Problems and Focus on Solutions

When NASA began the launch of astronauts into space, they found out that the pens wouldn’t work at zero gravity. (Ink won’t flow down to the writing surface.)

In order to solve this problem, they hired Andersen Consulting (Accenture Today). It took them one decade and 12 million dollars. They developed a pen that worked at zero gravity, upside down, under water, in practically any surface including crystal and in a temperature range from below freezing to over 300 degrees C.

The Russians used a pencil.