In difficult times, managers are often called on to exercise their powers of veto. Saying ‘yes’ is so much easier – it’s certainly so much less confrontationalist and unpleasant. But managers often have to say ‘no’ – to proposed expenditures, to the call for extra staff, and to new ideas and other proposals from staff. There is a right way to say ‘no’ and to minimise the rejection or disappointment that may result… 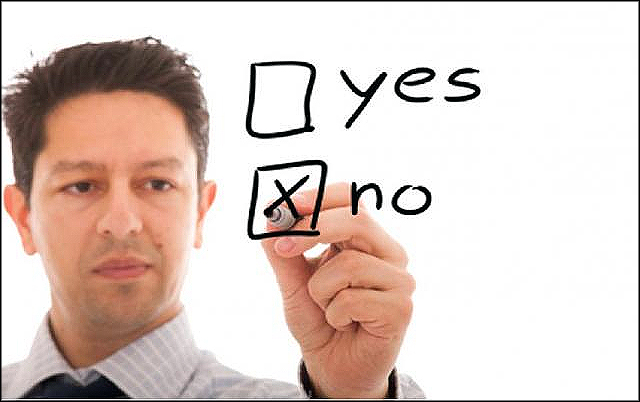 No is a powerful word. Here’s when you might want to use it, suggests motivational writer John Milne:

‘No can be a gloriously positive word,’ says Milne, ‘as well as a negative retort. And don’t forget that there are many circumstances when it’s important to remember that No isn’t forever!’

2. Be courteous in considering a request.

If you want to maintain your dignity and to prevent the discussion from degenerating into a shouting match, remember to be polite, pleasant, and courteous throughout the conversation. As a rule, if you are courteous and polite, most people will copy your behaviour.

3. Listen to the proposal.

People expect their views to be heard and considered. If you refuse to listen, even if you are familiar with the arguments, you’ll be asking for trouble. If you ignore what people are saying to you and off-handedly dismiss their request, you will only create animosity.

A delayed decision can only increase the chances of disappointment and resentment. You should try to make a quick decision. By delaying, you allow people to think you will be saying yes. So if you know what your response will be, answers such as ‘I’m not sure yet’ and ‘Let me think about it’ only get people’s hopes up. And then it’s even more devastating when you finally say no.

There’s nothing wrong with saying no – but say it politely, having based the decision on a just consideration of the facts. Explain why you decided as you did. Outline the supporting inform-ation that affected the decision, and make it very clear that all the options were carefully taken into account.

The disappointment or rejection can sometimes lead to heated debate, allowing people to force their views on you again rather than accept your decision. Firmly tell people that your decision is final – that you have weighed up all the facts and given justifiable reasons. And there the matter should rest.

By all means allow people to discuss your decision with you rationally, perhaps exploring alternatives; but limit their speaking time. Be fair, but always be firm. Ultimately your decision is still going to be no.

Easier said than done, but try. You have done nothing that warrants an apology; so, having made your decision after considering all aspects, you can confidently live with the outcome. Be sympathetic, but point out that your decision was made for the good of the organisation.

If you think it’s appropriate and the request is valid, you may consider offering a counter-proposal. For example: ‘I have a lot of work on my plate, Gordon, so – no – I can’t sit in for you at this afternoon’s meeting. But I’ll be happy to answer your telephone while you’re out.’ Such an approach can soften your refusal.

When your refusal is accepted, don’t assume that the episode is over. Depending on the degree of disappointment, you must rebuild the bridges between you and your staff member. This rebuilding helps to relieve any lingering tensions and to strengthen your hand on the next occasion.

Expect to say no several times a day. This is your right as a manager. Then, when it happens, you shouldn’t be too upset or feel guilty: you’ve already come to terms with this responsibility.