No matter what position you have, speeches or some form of public speaking and presenting will be something you will have to do at some point. We’ve been discussing some interesting tips and ideas that could help you over the course of this week and here are a few more to check out! 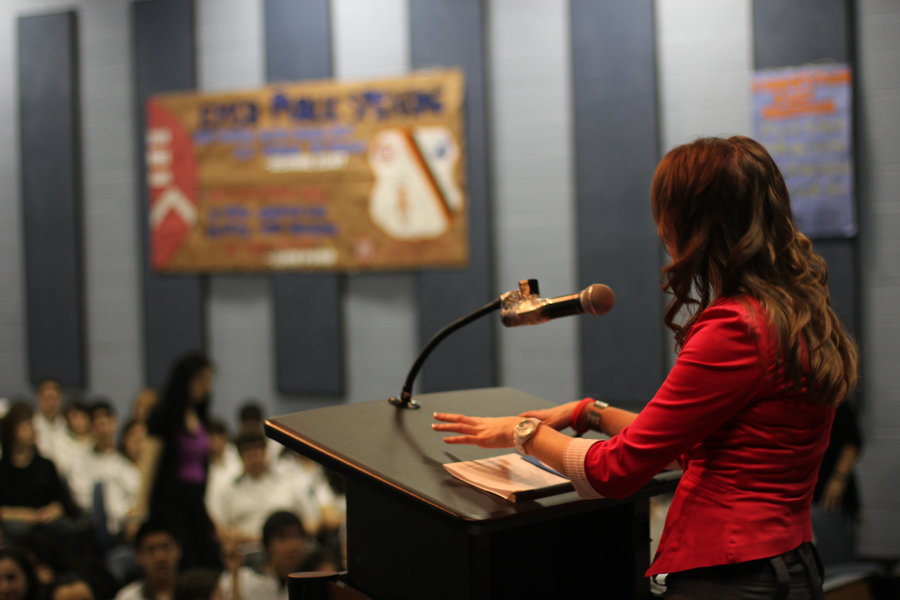 The classic way of structuring a talk is to ‘tell them what you are going to say – say it – tell them what you have said’. Your audience will probably only listen to one-third of what you say. If you say it three times in three different ways they will at least hear you once… To keep their attention throughout, give interim summaries which reinforce what you are saying and, above all, hammer home your key points at intervals throughout your talk…. You should build your argument progressively until you come to a positive and overwhelming conclusion. Provide signposts, interim summaries and bridging sections which lead your audience naturally from one point to the next.

Michael Armstrong in How to Be an Even Better Manager.

Mark Twain (aka Samuel Clemens) and renowned public speaker Chauncey Depew were once travelling aboard the same ship. When the boat was a few days out to sea, they were both invited by the Captain to a dinner and, when the time for speechmaking came along, Mark Twain was the first on the program. He spoke for 20 minutes and was a great hit. Then Depew was introduced. He stood up and said:

‘Mr Toastmaster and ladies and gentlemen. Before this dinner, Mr Clemens and I made made an agreement to swap speeches. He has just delivered my speech, and I thank you for the enthusiastic manner in which you received it. I regret to say, however, with apologies to Mr Clemens, that I have lost the notes of his speech, and I cannot remember anything he was to say.’

Then he sat down amid great laughter.

Unlike Mr Depew, you may not be able to get out of your next speech as skilfully – which is why it is imperative you know how to prepare for the occasion.

[There is a footnote to this story. On the day after the speechmaking, an Englishman who had been present at the dinner approached Mark Twain and said, ‘Mr Clemens, I consider you were much imposed upon last night. I have always understood that Mr Depew was a clever man but, really, that speech of his you gave last night struck me as being the most consumate rot…’]

When giving presentations, write your own introductions

According to Lynda Paulson in ‘The Executive Persuader’, whenever you’re asked to give a speech or presentation where someone else will be introducing you, you should write your own introduction and ask that person to read it. Rather than just listing your accomplishments, however, use the opportunity to introduce the audience to the style and content of your presentation. Treat the introduction as if it’s a part of the speech-put good, relevant material in there, so you catch the audience’s interest before you even step up to the podium. Don’t overdo it, though. Nobody likes long, rambling introductions. A good rule of thumb is one minute of introduction for the first 10 minutes of a speech; then, 20 more seconds of introduction for each 30 additional minutes of presentation.

A common tactic used by professional speakers is to write notes in the margin of their speech or presentation. These notes give them ‘stage instructions’ – telling them to pause, or give something added emphasis, or do something else they might otherwise forget to do. That works fine for professional speakers.

On the other hand, managers who don’t often speak in public are likely to let their nerves take over and read right past the margin notes. To avoid this, use a colorful highlighter pen to attract your attention to the margin. It’s hard to skip past something colored in neon pink or green!

Begin with a grabber

Hit your audience in those first couple of minutes with a grabber, a statement or prop that is controversial or unusual enough to grab their attention.

For example: Suppose you’re addressing the dull subject of increased government regulations. To grab attention, you might hold up a weighty volume of the Congressional Record and say: ‘Do you know what’s in this book? It contains 4137 new laws and regulations, all created last year. I’ll bet at least 100 of these new laws and government rules affect your business – maybe could even land you in prison – and you probably don’t even know what most of them are…’

You’ve got their attention. Now you can explain what you mean and what you propose can be done about it.