“Interviewers say it repeatedly: All other things being equal, they offer the job to the person who projects the greatest confidence during the interview. The total image you project, of course, will be dictated by your own personality and style – But it’s critical to remember that being well prepared, being well-dressed, and following a carefully thought-out strategy will greatly enhance your confidence and give you a decided advantage in the interview.” 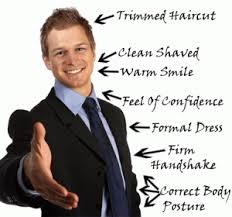 “The first five minutes of your interview are probably as important as all the rest of the time.”

She was presentable and had good references – but in addition to showing up ten minutes late, she called me ‘Mr Melody’ (instead of Medley!) throughout the interview. The two main things I remembered about her were that she had kept me waiting and that she had constantly mispronounced my name. I finally offered the job to someone whose typing and shorthand skills were not nearly as good.

Anthony Medley in Sweaty Palms: The Neglected Art of Being Interviewed.

According to recent research by the University of Toledo, it doesn’t matter how smartly you dress or how impressive your CV is; your chances of success at a job interview depend on how you perform in the first 15 seconds. The study found that, once an applicant has walked into the room, shaken hands with the interviewer, and sat down, their fate is all but sealed.

Initial body language and the handshake “is everything”, the researchers said.

“This is the first study to offer proof that you never get a second chance to make a first impression,” said research leader Professor Frank Bernieri. “Although the interviewers had seen the candidates for a short period only, they formed definite impressions of them.” UK psychologist Ros Taylor agreed with the findings: “To make a good impression, you don’t even get time to open your mouth. An interviewer’s response to you will generally be pre-verbal – how you walk through the door, your posture, whether you smile, whether you have a captivating aura, whether you have a confident handshake.”

But Andrew Swift of recruitment consultants Price Jamieson offers this caution: “Experienced interviewers try to form their conclusions about an applicant as the interview goes along. Indeed, there are times when I have completely and utterly changed my early views during the interview itself.”

Before interviewing, prepare the people who will give you references by sending them a one-page summary describing your attributes and accomplishments. Be honest, but not modest. Few references overstate your attributes, so give them every word you want them to say. After the interview, call your references to prime them for a possible call.