“In order to be a leader, a man must have followers. And to have followers, a man must have their confidence. Hence, the supreme quality for a leader is unquestionably integrity. Without it no real success is possible, no matter whether it is on a section gang or football field, in the army or in the office. If he lacks forthright integrity, he will fail. His teachings and actions must square with each other. The first great need, therefore, is integrity and high purpose.”

In our last blog post we covered some simple steps to building a reputation of integrity and honesty. People with strong reputations are generally the ones who will be sought out for promotions, opportunities and jobs. People want to be able to trust others and there is a real lack of integrity in the world today. Here are some more ideas, hints, tips and stories on integrity. 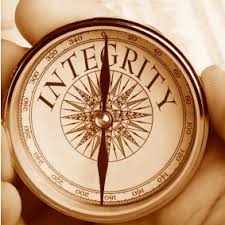 In business and in life…

Do all these things, and you cannot possibly fail yourself, your family, your working colleagues, or your organisation.

Back in the 1930s, so the story goes, a baker in Scotland suspected that a farmer who was supplying his butter was giving him short weight.

Over a period of several weeks he carefully checked the weight and his suspicions were confirmed. This so angered him that he had the farmer arrested.

‘I assume you have weights,’ said the judge at the farmer’s trial.

‘Then how do you weigh the butter you sell?’

‘Well,’ said the farmer, ‘when the baker began buying butter from me, I decided to get my bread from him. I just use the one-pound loaf he sells me as a weight for the butter I sell. If the weight of the butter is wrong, he has only himself to blame.’

The moral of the story is that dishonesty will ultimately return to haunt us which is why managers need to gain a reputation for honesty and integrity.

Getting around the Great Wall

In ancient China, the people wanted to be secure against the barbaric hordes to the north, so they built the great wall.

They built it up to 12 metres high so that no one could climb over it.

They built it nearly 10 metres thick so that nothing could break it down.

And then they settled back to enjoy their security.

During the first hundred years of the wall’s existence, China was invaded three times. Not once did the barbaric hordes climb over the wall or break it down or go around it. Each time they bribed the gatekeepers and then marched right through the gates!

You see, the Chinese relied so much on their walls of stone that they forgot to teach integrity to their children.

2000 years later, US President Dwight D. Eisenhower pinpointed the problem. He said that ‘without honesty and integrity, no real success is possible, no matter whether it is on a road gang, a football field, in the army or in the office. If people lack forthright integrity, they will fail. Therefore,’ he said, ‘the first great need is integrity and high purpose.’

In business, as in life, remember at all times to:

And if you can do all those things, you cannot possibly fail yourself, your family, your working colleagues, or your organisation.

Every time we engage in a dishonest act, chances are the results will return to haunt us. So the key question we must continually ask ourselves is: ‘What is the right thing to do?’

For Bill Newman, in ‘The Ten Laws of Leadership’, the answer is simple: