“By bringing conflicts out into the open and overcoming them, we develop honest, forthright, and loving relationships with ourselves and others. We turn heat into light.” 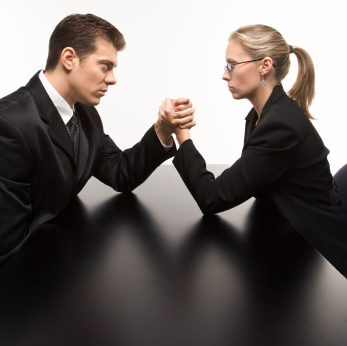 During a confrontation, if you reach an impasse, consider calling in a third party, depending on the seriousness of the conflict:

Advice for a confrontation:

If you’re caught in a confrontation, here’s how you can handle yourself more effectively:

Adrift on a sea of conflict

It was George Bernard Shaw who said that the test of people’s breeding is how they behave in a quarrel.

It might also be argued that the test of a manager’s virtuosity is how well he or she handles conflict.

Richard Wynn in ‘The Practitioner’ elaborates: ‘Just as the great test of a ship captain’s skill occurs in stormy rather than calm waters, so managers face their most bracing tests and their greatest opportunities in times of conflict.’

‘The work of a manager,’ writes Wynn, ‘is an almost never ending sequence of conflicts, some trivial and some very consequential. The challenge is not to eliminate conflict, but to minimise its destructive impact and make it a positive force in the organisation.’

Nothing can keep an argument going like two persons who aren’t sure what they’re arguing about.

Confrontations would not last for long if the fault were on one side only.

To disagree is one thing; to be disagreeable is another.

One way to avoid a confrontation is to be a good listener.

A long dispute means that both parties are wrong.

Erik Van Slyke, in ‘Listening to Conflict’, advises us to ‘think first’.

He says that, whenever we’re confronted with a conflict situation, we can process the available information in two ways – rationally and emotionally.

Too often people react to conflicts emotionally rather than rationally.

In order to respond to conflict rationally instead of emotionally, we must be aware of what we are feeling and why. The key to this self-awareness lies in identifying our core interpersonal zones.

According to Van Slyke, we have five interpersonal zones:

Any time someone invades one of these zones, it may trigger an emotional response from us.

When one person concludes that the other is a jerk or is incompetent, the potential for an emotional explosion is great. For example, if one party gets up the nerve to tell the other that he or she has serious personality problems, the result is fairly predictable. The person on the receiving end is going to be defensive – and the conflict escalates from there, getting louder and more bitter. Once unleashed, emotions always do more damage to the sender than the receiver.

Then, when teammates discover that open hostility doesn’t work, they often go to the other extreme. Instead of dealing with conflict rationally and professionally, they bottle up their resentment and anger. However, nothing kills relationships more surely than issues left unspoken.

The bottom line is that, as a manager, you must teach your team that issues can, and must, be discussed without resorting to explosive behaviour.