“Personality can open doors, but only character can keep them open.” ~Elmer G. Letterman 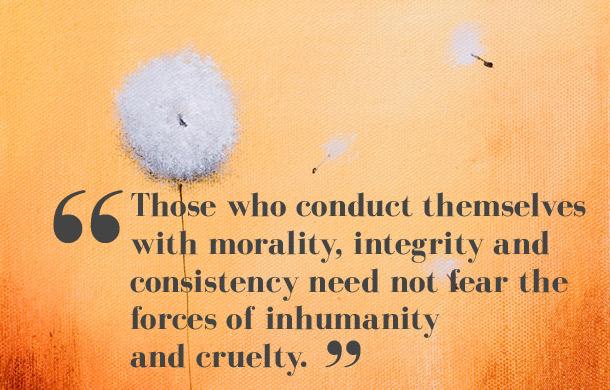 In today’s world, strong character is a rare find. Integrity, honesty, loyalty and hard work are some some traits that result in a strong character. Employer’s value character and those who are known to be trustworthy and reliable are often the ones who will succeed.

Political Astuteness is something that you may not learn in school; however, it plays a significant role in success in business.

“Man is by nature a political animal.” ~Aristotle

It’s important to keep in mind that you are responsible for your own career. Don’t Expect the Human Resources Department to plan your career. In fact, don’t expect anyone else to be concerned about it either.

There have been times in my career when someone has taken an interest in my promotion; however, it has always been in their own best interests to do so. Remember, companies are in business primarily to make money.

Above Everything, Have Integrity

You will find that the concentration of integrity increases the higher you go in an organization.

Remember Who You Work For

It’s true that where your treasure is, your heart will be also. There will be ample opportunities on a daily basis to bash your employer. Resist those opportunities. Keep in mind that

(1) you chose this company,

The leaders of the company will not be impressed by your ability to complain.

Make Your Boss and Your Boss’s Boss Look Good

As a practical matter, you are most likely working to take your boss’s job. Hopefully, your boss will be promoted, which will leave a vacancy. If your boss is not going anywhere, then the next level will have a major impact on your next position.

Who are the Leaders of the Company?

Find out the background of the company executives. What career path did they take? Chances are, they will value those credentials above others. Take note of great people in the company and get connected to them. If possible, find a way to work for them. If not, establish a network with as many of them as possible. The best possibility is to ask one of them be your mentor. You will be surprised how many people will be interested in helping in this regard.

“Whoever gossips to you will gossip about you.” ~Spanish Proverb

Watch What You Write or Say.

Assume that anything you write or say will be read or heard by everyone in the company. E-mail makes it easy to respond emotionally. Before you respond to an irritating e-mail, take a minute to calm down, then, write the e-mail. If you have a tendency to send harsh messages, save a draft and review it sometime later to ensure the tone is business appropriate.

A corollary to this principle is Happy Hour – don’t go! There is a huge risk of saying something you shouldn’t say, getting out of control, or just being in the wrong place at the wrong time. You should stay out of office politics. Don’t say anything bad about anyone, ever.

Arrive Early and Leave Late, but Not Too Late.

You want the reputation of a hard worker, but not one that can’t get their work done. This principle also applies to taking work home. Over the long-term, you want to have a life outside of work. Maintaining a work/life balance will keep you engaged in your job; therefore, more productive.

Find Out What Your Boss Wants and Deliver.

Regardless of your personality, relationships, or good looks, you must be productive. For your boss, it means doing what they want, no matter how silly it may seem to you. For example, I had a boss that wanted to know how many Dairy Queens between Dallas and Houston served a particular yogurt.

Always say, “Yes!” to a request from leadership. For your boss, there are ways to provide better solutions without damaging the relationship.

“Always do more than is required of you.” ~General Patton

Don’t take credit for yourself. This is important for a variety of reasons. First, you need people to help you get things done. Second, when people recognize people who work for you, you get the credit as well. Third, it’s the right thing to do.

When It Comes to Your Career

2. Remember Who You Work For

As Bill Karnes put it, “Eagles don’t flock; they fly alone. And eagles soar above the rest of their world. So, too, do people who start things, who lead groups or who otherwise set themselves apart from the crowd.”

Global Training Institute is a Registered Training Organisation that provides online training for industry professionals in the area of Business, Management, Project Management, Civil Construction, Local Government and more. Some of our online qualifications include the Diploma of Management, Diploma of Project Management, Advanced Diploma of Civil Construction, Certificate IV in Small Business Management and many more! View our qualification and short course options and equip yourself with the necessary skills to succeed in your career! Contact us on [email protected] or call at 1800 988 500.

By globalsite|October 1st, 2014|Leadership, Qualifications, Schools, Soft Skills, Training|Comments Off on A Career Built on Character