“To get ahead, you must put yourself on the line. That’s how individuals succeed, and that’s how companies succeed. With the increasing rate of change, ‘the status quo’ is almost nonexistent – you are constantly at risk.” 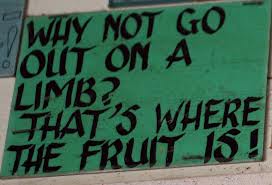 Two seeds lay side by side in the fertile spring soil. The first seed said, ‘I want to grow! I want to send my roots deep into the soil beneath me, thrust my sprouts through the earth’s crust above me, unfurl my tender buds like banners to announce the arrival of spring… I want to feel the warmth of the sun on my face and the blessing of the morning dew on my petals!’ And so she grew.

The second seed said, ‘I am afraid. If I send my roots into the ground below, I don’t know what I will encounter in the dark. If I push through the hard soil above I may damage my delicate sprouts… What if I let my buds open and a snail tries to eat them? And if I were to open my blossoms, a small child may pull me from the ground. No, it is much better for me to wait until it is safe.’ And so she waited.

A yard hen scratching in the early spring ground for food found the waiting seed and promptly ate it.

It just wasn’t worth the risk

In 1878, a young shop assistant in Watertown, New York, approached his boss with an idea.

‘Mr Moore,’ began Frank Woolworth, ‘I have a way to reduce our slow-moving stock. Why not put all these items on the counter and sell them for five cents each?’

The boss agreed, and the sale was a resounding triumph.

Flushed with success, young Woolworth was inspired enough to open his own store. But he would price all the items in the shop at five or ten cents!

He needed capital to finance such a venture, however, so he asked his former boss to supply the money in return for a share of the new business. Mr Moore turned him down flat.

‘The idea of too risky,’ he told Woolworth. ‘There are simply not enough items to sell for five or ten cents each.’

But Frank Woolworth went ahead without the support of his boss and, not only was he successful with his first shop, he eventually opened a chain of Woolworth stores across the United States – and, in time, around the world.

His former boss later remarked: ‘As far as I can figure out, every word I used to turn Woolworth down cost me about a million dollars.’

Mr Moore was not alone, for there were many people down the years who were just not prepared to take the risk…

Sticking your neck out

There were twenty producers who said to composer Leonard Bernstein, ‘It’s too risky!’ when he had the idea of converting Romeo and Juliet into a musical, set in modern day New York. He proved them all wrong – and West Side Story became a smash hit.

Inventor Alexander Graham Bell was hard pressed to find a major backer also. When he took his telephone to Western Union, for example, he was told, ‘What use could this company make of an electrical toy?’

Kodak turned down Chester Carlson. ‘Your idea is too risky,’ Carlson was told. So he took his invention elsewhere – and the Xerox Corporation was born, riding on the success of Carlson’s new photocopying machine.

Even composer Irving Berlin himself wasn’t prepared to take the risk. He left a little song called ‘White Christmas’ locked away in a trunk for three years – he felt it just wasn’t good enough. After he took the risk, it has sold in North America alone over 6 million copies of sheet music and 140 million records!

The bottom line is that, to achieve, you must sometimes be prepared to take a risk.

If you want to learn to take more risks or become a strong leader and manager, contact us to discover what online qualification will best suit your needs! Call 1800 998 500 today.